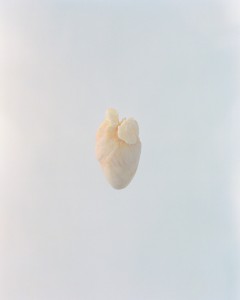 1.
We all know this: Repeat a word or a phrase often enough, listen to it over and over in your head, and it will soon start losing its meaning, turning unfamiliar, comic even, and, eventually, downright surreal. Ward Roberts’ series Flotsam gathers on you in a similar fashion.

2.
At first sight, the images seem innocent enough: a lonely figure on a vast expanse of beach, nondescript suburbia in the distance, infinite blue skies. A picture perfect moment, carefully composed, in beautiful sunwashed colours. Sweltering heat, a sheltered moment of peace and quiet, the ocean behind you. It is all so clear.

3.
But look closely, carefully enough, and minute details, moments, incongruities emerge. Nuances, really, but with so little to hold onto, they gain weight: A bright green house amidst a row of identical white picket fence homes. A parachute hanging silently in the sky. Sea gulls waiting in the distance like vultures. Construction tubes that look like grotesque giant cigarettes. Questions drift to the surface, shadows of associations and words more complicated. What felt strangely familiar at first now becomes slightly unsettling.

4.
‘Papa, papa, there is a cowboy in the sky!’ My young daughter yelling at me upon her bicycle. ‘What?’ ‘In the sky, a cowboy!’ ‘In the clouds?’ ‘YES! In the clouds!’ There are hardly any clouds in Roberts’ images. Just a wash of blue sky, so deep and impenetrable against the white sand it appears flat, unreal, oppressive almost.

5.
The lonely figure, a classic, exhausted motif. Here, sunbathing, exposed, their isolation in this near-perfect setting takes on a curious air of sadness: There must be something wrong with an urban beach in the bright midday sun without any people. There is no sound within these images.

6.
Looking closer still; the lonely figure, sunbathing, shed of most clothes, which always makes for a ridiculous moment. Identities fading with the distance, blissfully equal under the sun. It could be you or me. Apparently unaware of our surroundings, of life around us, or of our picture being taken, for that matter. There, and yet not there.

7.
It is what we dream of, so many times, and yet, dreams come true at a price. In one of the images, the shadow of an aeroplane glides across the sand, looming, threatening somehow. The motionless sun reveller entirely oblivious, it seems. There is a cowboy in the sky. But at some point, we would rather not know, would rather close our eyes, as long as someone else is paying the bill, as long as our lonely small lives are secure.

8.
On a side note: these images are so perfectly composed, so immaculately framed – these are not stolen moments, they are slow, carefully arranged compositions. Someone took time and dedication to take these pictures. They have the intention and intensity of paintings. It is hard to tell: Are they staged? Are they ‘real’? But then again, part of the appeal lies in not knowing.

9.
American dreaming: There is a sense of pioneers in these photographs, a faint memory of the first settlers, taming nature, clearing the way for the future, for progress, claiming the land for development. The question is: Who is claiming from whom?

10.
With the figures so distant, so insignificant, the background – not nature, but suburbia, ‘civilisation’, today – comes to the fore, overshadowing the centre, taking over. It is telling its very own story.

11.
A beach is a beach. It could be any beach, but then again, it is a very specific beach, called Rockaway Beach in New York, which seems like a contradiction already. The place itself prompted the pictures, drawing Roberts back again and again over a period of two years. A place that is universal by being specific.

12.
The series can be divided into two very different storylines that are told simultaneously, when in fact they are interdependent, and are maybe one and the same after all. In one story, we have a happy ending: White sand, picket fences, pretty wooden houses, clear skies. It is a Disneyland rendering of our petty dreams.

13.
In the other story, things turned out differently, reality setting in: Council estates looming in the distance, rows and rows of blocks of social housing, strangely abandoned and peaceful in the bright midday sun – but awkward nonetheless, suspicious, unpredictable. There is construction going on here and there for a better future. Development, we call it, when it feels more like failure. An abandoned promise we have grown tired of.

14.
In real life, the stories are all too familiar: Rockaway Beach is a neglected, somewhat exhausted coast resort, long overlooked but recently rediscovered. The same tired cycle: social housing, cheap prices, word of mouth spreading, ‘names’ moving in, money following suit, eating itself and everyone else in the way. Gentrification: a universal phenomenon, and yet so specific each and every time.

15.
It is repetition that makes these images so interesting, and so numbing. The same motive, the same composition, the same place. Again and again, like the tide, wearing us down, relentlessly. The mind tires, our attention waning. We know what to expect by now, and yet, we are not so sure anymore quite what we are looking at.

16.
The images forcing us to slow down, gently imposing their rhythm, their faded colours, their intensity of looking harder, closer, than we ever wanted to. Words losing their meaning. Time standing still for a moment. The world quietly opening up. 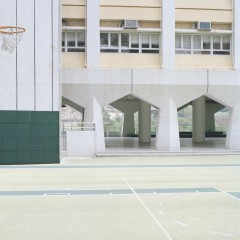